Another Lawsuit Filed Against Stryker Due to Hip Implant Failure

Another lawsuit against Stryker was filed on November 19, 2013 in the U.S. District Court for the Central District of Illinois in Peoria. The plaintiff, Mary Kay McDowell, alleges that she was injured by two different types of Stryker hip devices. McDowell and her husband are seeking compensation from Stryker for unanticipated hospital expenses, pain and suffering, lost wages and other damages caused by the premature failure of the Stryker's recalled hip replacement devices. 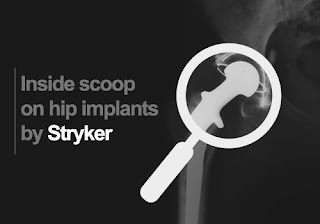 In the recent years, there is a concern that failure rate of metal-on-metal (MoM) hip replacement implants are four times substantially higher compared to other hip implant designs, online sources reveal. The US Food and Drug Administration (FDA) have been wary about these growing problems and have made recommendations for the past years, say an article found at http://usatoday30.usatoday.com/news/health/story/2012-06-25/metal-hip-implant-risks/55845858/1. There is a belief that that large-head stemmed MoM implant reduces the risk of potential dislocation and highly resistant to wear, following the hip replacement surgery. However, it was discovered that these large-head stemmed metal implants have higher failure rates compared to those with smaller heads. Lawsuits are filed in the different US states due to this problem.

Another surprising discovery about MoM hip implants is that women have drastically higher risk of hip implant failure compared to men. Researchers believed that there is a connection between the small size of women’s hip joint and bones and potential implant dislocation. Overall, metal-on-metal implants required revision due to failure more quickly than other implants, with a 6.2 percent needing revision within five years of implantation. The size of the head of the metal on metal implant affected the failure rate in men and women, with larger heads failing earlier.

Another concern related to MoM problems is the potential occurrence of metallosis. It is a medical condition in which there is a high build up of metal debris in the blood. This metal debris is produced by the friction between the two metal surfaces, the ball-and-socket of the implant. The body seems to react to this microscopic debris with an immune response. This can lead to soft-tissue and bone damage around the hip joint. In some patients, this tissue damage has been severe causing permanent injury andrequiring additional surgery. Patients with this particular implant are much more likely to need their hip replacement repeated.

One popular brand of MoM hip implants is Stryker. It keeps two known products, Rejuvenate and ABG II, which have been very controversial. These products were marketed to provide increased stability, better movement, and superior fit over other hip replacement products available in the market. However, these hip implants have been recalled due to dangerous health complications. Because of these concerns, these implants should be closely monitored to watch for potential problem. You may visit the stryker hip implant recall website for more info.
References:
Posted by Unknown at 5:00 AM No comments:

A hip replacement patient may attain quick recovery from the surgery by employing several proven and effective techniques or methods, according to online sources. They are given with precautions and exercises to be followed after the surgery. By following these set of instructions, it may raise the patient’s chances for a better result after the hip replacement surgery, as attested bywww.sutterhealth.org/orthopedics/hip/recovery-from-hip-replacement.html. It must be taken seriously since it is a major procedure, and by following these techniques, a patient may have increased chances of fast recovery, with less risk of unwanted health side effects.

Fast recovery may require you to decide for a doctor with more than enough experience in hip replacement surgery. Your doctor may guide you through the process until you are fully recovered.

Physical therapy is also one of the essential techniques required after hip replacement surgery. Patients undergoing early physical therapy may be able to walk safely and and prevent dislocation of the hip implant or suffer other injuries. Your physical therapist may give you a set of simple exercises, which you may perform in bed, to prevent blood clots and avoid the tightening of the thighs, squeezing your buttocks, or pointing your feet up and down.

The coordination between your doctor and physical therapist may greatly help you in recovering your range of motion and flexibility and continue with your normal daily life. These exercises may help you build strength, as well as improve the motion of your hip. These are some of the simple bed exercises which may help you achieve fast recovery from the hip replacement operation:


Among the known brands for hip replacement devices is Stryker. The tiny metal shards that sheared off from the artificial joints may cause constant pain or infection and bloodstream is contaminated with high levels of metal, medical experts say. The Stryker injury lawsuit may be helpful to individuals seeking information about hip replacements.

Posted by Unknown at 9:27 AM No comments: